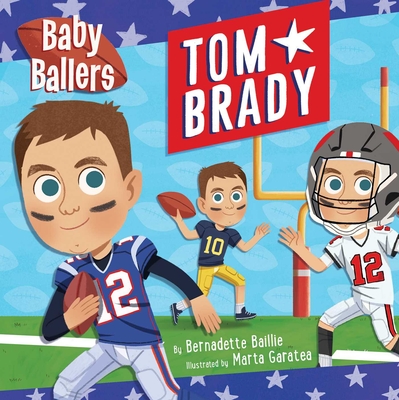 By  Bernadette Baillie , Illustrated By  Neely Daggett
$ 7.99
Out of Stock In Store

Introduce a new generation to Tom Brady with this cute board book for baby football fans!

Before he was winning Super Bowls, Tom Brady was just a high school athlete with a good arm. Follow along as he throws himself into football and goes from warming the bench to lighting up the field! Introduce little ones to the life of a true game changer in this adorable board book biography that’s perfect for baby ballers!

Bernadette Baillie is a Filipina American writer and speaker based in San Diego, California. Growing up in a sports-obsessed family, her first job was at a sporting goods store during the heyday of some of the greats of basketball, football, and baseball, including Michael Jordan, Magic Johnson, Walter Peyton, and Ken Griffey, Jr. She came of age at the exact time of the signature athlete shoe and sold hundreds of pairs of Air Jordans as a teenager. Bernadette earned a degree in Advertising from Pepperdine University before moving to New York City to work at MTV Networks, Nickelodeon, and Sony Music Entertainment. As a mom for four kids, she spends her time shuttling her kids to practices, games, the beach, and various skate parks. Finding ways to honor, depict, celebrate, and promote diversity in publishing is her lifelong passion.

Neely Daggett is an Iranian American artist who was born in Columbia, Missouri, in July 1982. She spent her early childhood riding bikes, swimming in lakes, exploring caves, and creating her own books out of construction paper. In sixth grade, her family relocated to Chicago, and although she currently lives in Portland, Oregon, she still considers herself a Chicagoan at heart. Neely has a degree in psychology from the University of Illinois at Chicago and a degree in graphic design from the Art Institute of Colorado. Neely is a mom to three human children, 21 plant babies, and one cat. Creating diverse, lovable characters for children's books is her passion. She is also very much inspired by nature and hopes to illustrate a book that promotes a cleaner, kinder planet someday.