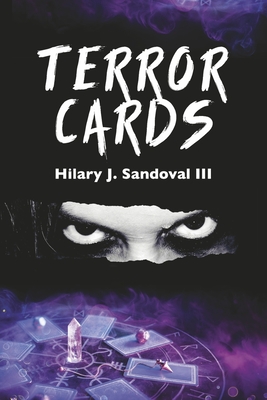 TERROR CARDS
Griselda Lopez a seemingly nondescript psychic and tarot card reader by trade is a suspect in a brutal murder of a local internet millionaire in the West Texas city of El Paso. Unbeknownst to veteran homicide detective Phil Ramirez, eighteen years earlier she orchestrated perhaps the perfect crime. No murder weapon, no provable evidence and no actual murderer. Yet it was a premeditated, well-planned scheme to take the life of another for financial gain. Ramirez's search for justice would lead him on a desperate, harrowing journey that would challenge his faith in a higher benevolent power, question his own sanity, tempt him to violate his long-held values and break the very law he so proudly swore to uphold. In Griselda Lopez, otherwise known as the Tarot Lady, he would face his most nightmarish adversary. Would the highly decorated investigator find justice in the cards? Or will the Tarot Lady deal him a hand that brings his stellar career to a shameful, disgraced and terrifying end?

As an author Hilary Sandoval wrote the book, "Yes I Can KIds" and was a contributing author to the best- selling book "Transformation" with renowned author Brian Tracy. Just months out of high school he promoted his first professional kickboxing event at age 18. Special guests at his events included action film star Chuck Norris, comedic duo Cheech and Chong, the Dallas Cowboy Cheerleaders, Rudy Ruettiger the subject of the hit Disney movie "Rudy", martial arts film stars Cynthia Rothrock and Ernie Reyes Jr. and film star Randall "Tex" Cobb. In 1980 he promoted the first nationally televised World Kickboxing in the state of Texas. With El Paso, Texas as his home base he promoted events in Phoenix, Midland, Dallas and Houston. During his time as a promoter, he promoted 23 World Champions. Recently he was a contributing author in the book "Life Skills for Kids". In 1988 he opened his first martial arts academy and over three decades was instrumental in helping tens of thousands of children develop their self-confidence, self-discipline, self-esteem and physical fitness through the study of the martial arts.