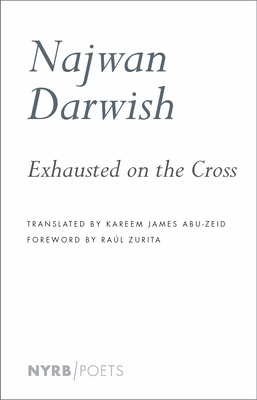 By  Najwan Darwish , Foreword by  Raul Zurita , Translated by  Kareem James Abu-Zeid
$ 16.00
Likely On Our Shelves

A much-anticipated follow-up to Nothing More to Lose, this is only the second poetry collection translated into English from a vital voice of Arabic literature.

“We drag histories behind us,” the Palestinian poet Najwan Darwish writes in Exhausted on the Cross, “here / where there’s neither land / nor sky.” In pared-down lines, brilliantly translated from the Arabic by Kareem James Abu-Zeid, Darwish records what Raúl Zurita describes as “something immemorial, almost unspeakable”—a poetry driven by a “moral imperative” to be a “colossal record of violence and, at the same time, the no less colossal record of compassion.” Darwish’s poems cross histories, cultures, and geographies, taking us from the grime of modern-day Shatila and the opulence of medieval Baghdad to the gardens of Samarkand and the open-air prison of present-day Gaza. We join the Persian poet Hafez in the conquered city of Shiraz and converse with the Prophet Mohammad in Medina. Poem after poem evokes the humor in the face of despair, the hope in the face of nightmare.

Najwan Darwish is one of the foremost contemporary Arab poets. Since the publication of his first collection in 2000, his poetry has been hailed across the Arab world and beyond as a singular expression of the Palestinian struggle. NYRB Poets published Darwish’s Nothing More to Lose, translated by Kareem James Abu-Zeid, in 2014, which was picked as one of the best books of the year by NPR and nominated for several awards. Darwish lives between Haifa and his birthplace, Jerusalem.

Kareem James Abu-Zeid is a translator, editor, writer, and scholar who works across multiple languages. He is the author of the forthcoming book The Poetics of Adonis and Yves Bonnefoy: Poetry as Spiritual Practice. He lives in the countryside just outside of Santa Fe, New Mexico.

Raúl Zurita was born in Santiago de Chile. His book INRI is published by NYRB Poets.