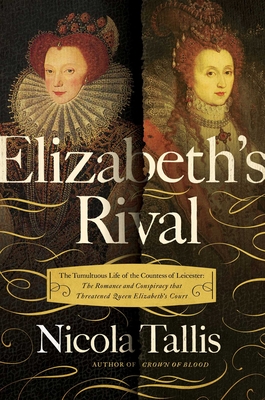 By  Nicola Tallis
Hardcover
$ 27.95
Out of Stock In Store (Click to Order)

Favorite, foe, rival—a gripping tale of the countess who dared cross a queen amidst the dangerous intrigues of Elizabethan England.

A kinswoman to Elizabeth I, Lettice Knollys had begun the Queen’s glittering reign basking in favor and success. It was an honor that she would enjoy for two decades. However, on the morning of September 21st, 1578, Lettice made a fateful decision. When the Queen learned of it, the consequences were swift. Lettice had dared to marry without the Queen’s consent. But worse, her new husband was Robert Dudley, Earl of Leicester, the Queen’s favorite and one-time suitor.

Though she would not marry him herself, Elizabeth was fiercely jealous of any woman who showed an interest in Leicester. Knowing that she would likely earn the Queen’s enmity, Lettice married Leicester in secret, leading to her permanent banishment from court. Elizabeth never forgave the new Countess for what she perceived to be a devastating betrayal, and Lettice permanently forfeited her favor. She had become not just Queen Elizabeth’s adversary. She was her rival.

But the Countess’ story does not end there. Surviving the death of two husbands and navigating the courts of three very different monarchs: Henry VIII, Elizabeth I, and Charles I, Lettice’s story offers an extraordinary and intimate perspective on the world she lived in.