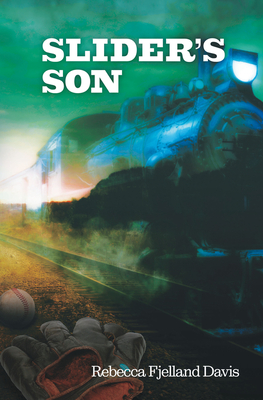 Grant O’Grady wants nothing more than to be a major league baseball pitcher. He’s only thirteen, but his dream seems possible . . . until Big Joe turns his life upside down.

Grant and his buddies are no strangers to risk. At the end of the Great Depression in small-town North Dakota, money is tight, so Grant and his friends swipe coal from the coal train when it stops in town to fill its boiler. It’s risky to climb the train cars, but so is climbing the water tower to chuck snowballs at passing cars, and so is shooting out Christmas lights downtown.

But risk turns into very real danger every time Big Joe shows up. After an encounter with the man one winter night in 1936, Grant’s life will change forever.

Rebecca Fjelland Davis (also known as Becky Brooks) lives outside Mankato, Minnesota, with her husband and Newfoundland dog, Freya. She writes, rides her bike a few thousand miles a year, and walks the prairie and woods with Freya. A former marathoner and two-time women's champion of the National 24-Hour Challenge cycling event (and yes, she used to play baseball and pitched softball), she says her young characters are athletes because she doesn’t understand sedentary lives. Becky's motto: "Better to burn out than to rust out." She grew up on a farm near Huxley, Iowa, and now teaches writing, humanities, and literature at South Central College in North Mankato. Her other publications include Medusa Tells All: Beauty Missing, Hair Hissing (Capstone, 2014), Chasing AllieCat (Flux, 2011), Woof and Wag: Bringing Home a Dog (Picture Window Books, 2008), Jake Riley: Irreparably Damaged (HarperCollins, 2003), and nine other children's books with Capstone Press. Her essays have also been published in various periodicals, including most recently "Grave Lesson in Winter" in Mankato Magazine in 2016.