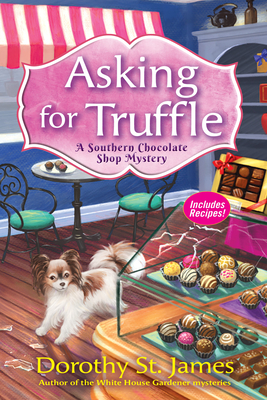 When Charity Penn receives a letter saying she won a trip to Camellia Beach, South Carolina complete with free cooking lessons at the town’s seaside chocolate shop, The Chocolate Box, she’s immediately skeptical. She never entered any contest. Her former prep school friend offers to look into the phony prize—only to end up drowned in a vat of chocolate.

Struck with guilt, Penn heads to the southern beach town to investigate why he was killed. But as wary as she is of the locals, she finds herself lured into their eccentric vibe, letting her defenses melt away and even learning the art of crafting delicious chocolates. That is, until delight turns bittersweet as she steps straight into the midst of a deadly plot to destroy the seaside town. Now, only Penn’s quick thinking and a mysterious cask of rare chocolate can save the town she’s learning to love.

Rich and decadent, Asking for Truffle, the first in a new cozy series by Dorothy St. James, is sure to be a delectable read for fans of JoAnna Carl and Joanne Fluke.

Dorothy St. James is the author of the White House Gardener mystery series. For the past twenty years she made her home on Folly Beach, an artsy island community in South Carolina with her sculptor husband. Dorothy is a member of Mystery Writers of America (MWA) and the International Thriller Writers (ITW). This is her first Southern Chocolate Shop mystery.