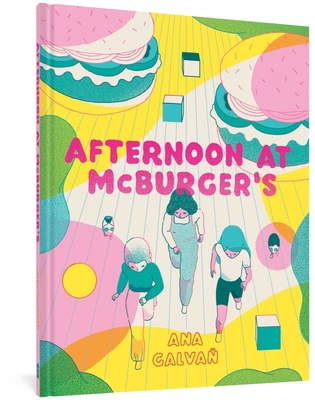 A science-fiction graphic novella grounded in a familiar experience for most: spending an afternoon with our best pals over a burger and fries. But this joint has something more special than a Happy Meal: the "Once Party" menu.

The "Once Party" menu, for ages 11 and up, can only be ordered once (of course). But there's a catch: not everyone who does gets the special prize. Those who do, go to a room where they can view five minutes of one of three moments in their future. Galvan manages to create a vivid world that is both a recognizable and alien depiction of adolescence. There are mean girls, and fast food, and BFFs with crappy older brothers, as well as familiar hints of 1990s design and fashion. Yet, it's also rife with futuristic flourishes like little robotic eggs that walk and talk, like anthropomorphic Alexas.
At its heart, however, Afternoon at McBurger's is a timeless story about friendship and innocence and the discoveries of adolescence (both good and bad), with layers to be revealed only through multiple readings. And Galvan's visual style, anchored by a mastery of pastel and primary colors, will make you want to do so immediately.

The Spanish artist Ana Galvan left advertising to pursue comics and illustration full time. Her work has appeared in publications such Spanish Fever, Nobrow, and many more venues. Additionally, she runs the website www.tiktokcomics.com, on which she has published various short comics.