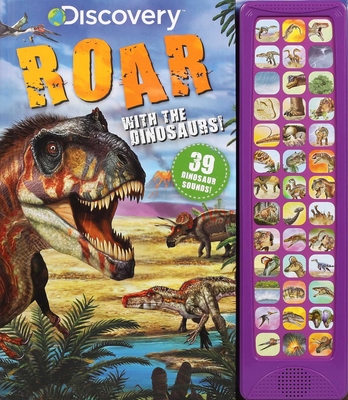 Press the buttons to hear the dinosaurs roar!

The prehistoric world of dinosaurs comes to life in Discovery: Roar with the Dinosaurs! This book features 39 push-button sounds. While reading the text, children can note the icons in the text and then press the corresponding sound button to bring the dinosaur scenes to life. Hear the mighty T.rex roar across the jungle, a distant volcano erupt, or a hungry Triceratops munch on some plants in this hands-on book perfect for dinosaur enthusiasts.

Courtney Acampora holds a B.A. in art history from San Diego State University and a M.A. from the University of Arizona. Currently working in publishing, Courtney's lifelong love for both art and books fused together and gave her the opportunity to write and create engaging books for kids. Courtney lives in San Diego, California.

Franco Tempesta was born in Milan, Italy. Since he was a child, he loved drawing animals, dinosaurs, and dragons. Specializing in naturalistic illustration, in the last ten years he has focused his attention on the realization of realistic images of dinosaurs and primitive mammals. He has collaborated with national and foreign publishers, such as Smithsonian, National Geographic, Random House, Firecrest Publishing, Geoworld, and important advertising agencies of Italy. Since 1990, he has been a member of the Italian Illustrators Association. In April 2014, the Museum of Paleontology of Naples hosted a permanent exhibition dedicated to his illustrations of dinosaurs. Franco Tempesta loves nature, the sea, diving, and traveling.