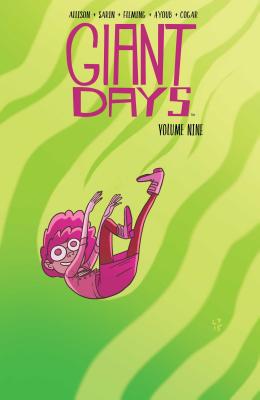 It’s the end of second year, and everything is happening so fast for Esther, Susan and Daisy!

It’s the end of second year, and everything is happening so fast! Moving out, breaking up, breaking hearts, breaking…bones? Best-Mates-for-Life Esther, Daisy, and Susan had better hold on tight if they want to make it to their third year, never mind in one piece!

John Allison (Bad Machinery, Scary Go Round) and illustrators Max Sarin and Liz Fleming shepherd us through another action-packed semester in Giant Days Volume 9, which collects Issues #33-36 of the Eisner Award-nominated series.

John Allison is a British comic writer and artist, known for his Eisner Award nominated series Giant Days, as well as webcomics Bobbins, Scary Go Round, and Bad Machinery.