Eat, and Love Yourself 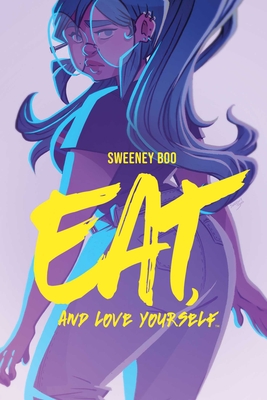 Eat, and Love Yourself

A story about Mindy, a woman living with an eating disorder who has to learn how to love herself again.

In pursuit of the perfect body, Mindy buys the low-fat diet products and the glossy magazines which promise the secret to losing weight. One night, while perusing the aisles of the neighborhood convenience store for a midnight snack, she finds a new product. A chocolate bar called “Eat and Love Yourself”. On a whim, Mindy buys the curious candy, not knowing that with every piece of chocolate she eats, she will be brought back to a specific moment of her past -- helping her to look at herself honestly, learn to love her body the way it is, and accepting love. Perhaps, she will even realize that her long lost high school best friend, Elliot, was more than just a friend…

Sweeney Boo (Love Is Love) presents an honest and uncompromising look at how we form our self-image, the eating disorders that haunt our most private moments and what it takes to learn to love ourselves again.

Sweeney is a comic artist and illustrator living in Montreal, Canada. She grew up in the southwest of France, where she studied graphic design and listened to really loud rock music. She started working as a comic letterer and colorist for french publishers right after graduation, while pursuing her dream of being a comic artist. In 2015 she made the decision to move to Montreal, Canada. One short year after the big jump across the ocean she started working at a mobile game company as a 2D Artist. She never lost sight of her true dream though, so she continued to draw comics during the nights and weekends. Her comic debut happened during the summer 2016 when she created a cover and a short story for Rat Queens (Image Comics). Later on, in December 2016 she launched a Kickstarter campaign for her first graphic novel called "Eat, and Love Yourself", a 150-page story about eating disorders, depression, body dysmorphia, and ultimately self-love; a subject really important to her. The book was financed and picked up by Boom! Studios in 2019, for publication in 2020. In 2017, she had the chance to work on the costume designs of America Chavez, Inferno, and Patriot for the show "Marvel Rising", combining two of her favorite things, fashion and superheroes. Today Sweeney lives a happy, full time freelance life of drawing all day, watching a lot of Game of Thrones and eating a lot of nice cheeses. All the while being kept company by her feline assistant Loki, who doesn't do much except sit pretty while being a fluff. Sweeney loves drawings edgy fashion ladies, especially if they are witches. She works now for various publishers such as Boom! Studios, Archie Comics, IDW, Marvel, and Image comics.