Learning on the Left: Political Profiles of Brandeis University 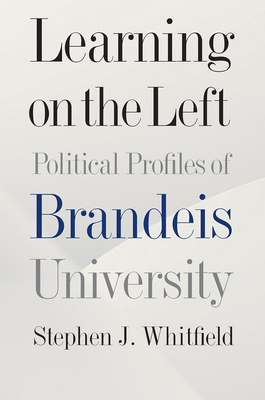 Learning on the Left: Political Profiles of Brandeis University

Brandeis University is the United States’ only Jewish-sponsored nonsectarian university, and while only being established after World War II, it has risen to become one of the most respected universities in the nation. The faculty and alumni of the university have made exceptional contributions to myriad disciplines, but they have played a surprising formidable role in American politics.

Stephen J. Whitfield makes the case for the pertinence of Brandeis University in understanding the vicissitudes of American liberalism since the mid-twentieth century. Founded to serve as a refuge for qualified professors and students haunted by academic antisemitism, Brandeis University attracted those who generally envisioned the republic as worthy of betterment.  Whether as liberals or as radicals, figures associated with the university typically adopted a critical stance toward American society and sometimes acted upon their reformist or militant beliefs. This volume is not an institutional history, but instead shows how one university, over the course of seven decades, employed and taught remarkable men and women who belong in our accounts of the evolution of American politics, especially on the left. In vivid prose, Whitfield invites readers to appreciate a singular case of the linkage of political influence with the fate of a particular university in modern America.