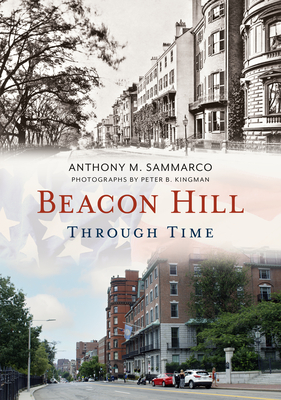 Beacon Hill is not just the location of the Massachusetts State House but is a neighborhood which has evolved over the last two centuries as a thriving nexus of cultures. Beacon Hill was one of the three hills of Boston (known as the Trimount, later Tremont, and for which a street was named) that included Mount Vernon on the left of Beacon Hill and Pemberton Hill on the right. Known for its Federal-style red brick row houses, narrow gaslit cobblestone streets and brick sidewalks, it is not just a historic neighborhood but one that embraces people of all walks of life from the early nineteenth century to the present. Beacon Hill was cut down in the early nineteenth century and the soil was used to infill and create buildable land. The area at the foot of Beacon Hill, just west of Charles Street, was infilled from the soil carted to the foot of the hill by a railway system to create a flat plain that stretched from Beacon Street opposite the Public Garden to Cambridge Street. As Nathaniel Shurtleff said in A Topographical and Historical Description of Boston: The hills have been removed to fill up valleys and waste places; streets, vying with each other in their comfortable and sightly mansion houses, have been laid out ... and in the Beacon Pole, upon which the warning light and so often blazed, has become now the most populous, as well as the most comfortable part of the city. The quintessential red brick row houses of Beacon Hill, built by the Boston Brahmins, were a few blocks away from the North Slope of the hill in the late nineteenth century. This area was initially an African American community and later that of immigrants, among them Jewish immigrants who would see places of worship, tenements and apartment buildings built.