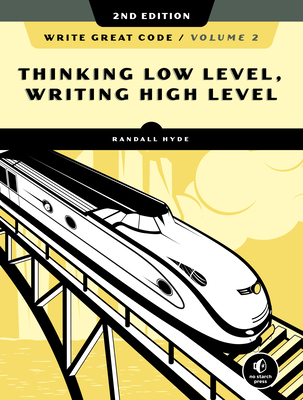 Thinking Low-Level, Writing High-Level, the second volume in the landmark Write Great Code series by Randall Hyde, covers high-level programming languages (such as Swift and Java) as well as code generation on 64-bit CPUsARM, the Java Virtual Machine, and the Microsoft Common Runtime.

Today's programming languages offer productivity and portability, but also make it easy to write sloppy code that isn't optimized for a compiler. Thinking Low-Level, Writing High-Level will teach you to craft source code that results in good machine code once it's run through a compiler.

You'll learn:
•  How to analyze the output of a compiler to verify that your code generates good machine code
•  The types of machine code statements that compilers generate for common control structures, so you can choose the best statements when writing HLL code
•  Enough assembly language to read compiler output
•  How compilers convert various constant and variable objects into machine data

With an understanding of how compilers work, you'll be able to write source code that they can translate into elegant machine code.

Randall Hyde is the author of The Art of Assembly Language, one of the most highly recommended resources on assembly, and the three volume Write Great Code series (all No Starch Press). He is also the co-author of The Waite Group's MASM 6.0 Bible. He has written for Dr. Dobb's Journal and Byte, as well as professional and academic journals.