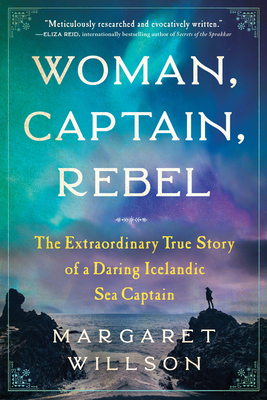 A daring and magnificent historical narrative nonfiction account of Iceland's most famous female sea captain who constantly fought for women's rights and equality—and who also solved one of the country's most notorious robberies.

Every day was a fight for survival, equality, and justice for Iceland's most renowned female fishing captain of the 19th century.

History would have us believe the sea has always been a male realm, the idea of female captains almost unthinkable. But there is one exception, so notable she defies any expectation.

This is her remarkable story.

Captain Thurídur, born in Iceland in 1777, lived a life that was both controversial and unconventional. Her first time fishing, on the open unprotected rowboats of her time, was at age 11. Soon after, she audaciously began wearing trousers. She later became an acclaimed fishing captain brilliant at weather-reading and seacraft and consistently brought in the largest catches. In the Arctic seas where drownings occurred with terrifying regularity, she never lost a single crewmember. Renowned for her acute powers of observation, she also solved a notorious crime. In this extremely unequal society, she used the courts to fight for justice for the abused, and in her sixties, embarked on perilous journeys over trackless mountains.

Through adventure, oppression, joy, betrayal, and grief, Captain Thurídur speaks a universal voice. Here is a woman so ahead of her times she remains modern and inspirational today. Her story can now finally be told.

"Meticulously researched and evocatively written, Woman, Captain, Rebel provides not only a captivating insight into 19th-century Iceland, but also introduces readers to the inspirational, real-life fishing captain Thurídur, a tough and fiercely independent woman who deserves to be a role model of determination and perseverance for us all." —Eliza Reid, internationally bestselling author of Secrets of the Sprakkar

"A crime has been committed in 19th century Iceland and in steps a mysterious seawoman moonlighting as a detective, dressed in male clothes. Margaret Willson unravels this legendary casework of Captain Thurídur, down to the finest detail, with a brilliant portrait of old Iceland by the sea." —Egill Bjarnason, author of How Iceland Changed the World

"Reading about this remarkable woman's journey will challenge your ideas about history and change yours too." —Major General Mari K. Eder, author of The Girls Who Stepped Out of Line

"All credit to Margaret Willson for excavating the story of Thurídur Einarsdóttir in a century which can at long last appreciate this feisty and resilient Icelandic seafarer. The meticulous research is worn so lightly that it reads like a saga." —Sally Magnusson, author and broadcaster

"A beautiful story of one woman's perseverance against tragedy, hardship, and the open seas." —Katharine Gregorio, author of The Double Life of Katharine Clark

"With a clear, compelling narrative voice, Willson illuminates the life of an extraordinary woman and brings rural Iceland to life for her readers." —Shelf Awareness

MARGARET WILLSON is a writer and cultural anthropologist. She has traveled extensively, working, doing research, or ethnographic film in Papua New Guinea, Brazil, Mongolia, Australia, New Zealand, Iceland...and a number of other places. She currently lives in Seattle with her partner and their cat Mister.