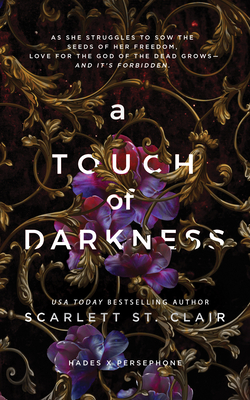 By  Scarlett St. Clair
Paperback
$ 16.99
Likely On Our Shelves

From bestselling author Scarlett St. Clair comes a dark and enthralling reimagining of the Hades and Persephone Greek myth.

"Let me worship you," he said.

She remembered the words she had whispered to him in the back of the limo after La Rose. "You will worship me, and I won't even have to order you." His request felt sinful and devious, and she reveled in it.

Persephone is the Goddess of Spring in title only. Since she was a little girl, flowers have only shriveled at her touch. After moving to New Athens, she hoped to lead an unassuming life disguised as a mortal journalist. All of that changes when she sits down in a forbidden nightclub to play a hand of cards with a hypnotic and mysterious stranger.

Hades, God of the Dead, has built a gambling empire in the mortal world and his favorite bets are rumored to be impossible. But nothing has ever intrigued him as much as the goddess offering him a bargain he can't resist.

After her encounter with Hades, Persephone finds herself in a contract with the God of the Dead, and his terms are impossible: Persephone must create life in the Underworld or lose her freedom forever. The bet does more than expose Persephone's failure as a goddess, however. As she struggles to sow the seeds of her freedom, love for the God of the Dead grows—a love that is both captivating and forbidden.

Scarlett St. Clair is the bestselling author of the HADES X PERSEPHONE SAGA, the HADES SAGA, KING OF BATTLE AND BLOOD, and WHEN STARS COME OUT. She has a Master's degree in Library Science and Information Studies and a Bachelors in English Writing. She is obsessed with Greek Mythology, murder mysteries, and the afterlife. You can find pictures of her adorable dog Adelaide on her Instagram at authorscarlettstclair, and updates on her books at www.scarlettstclair.com.