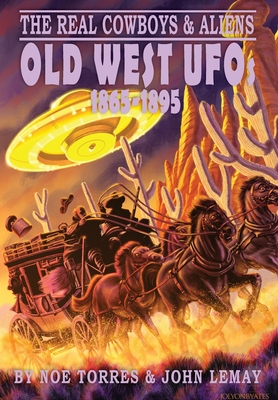 By  Noe Torres , John Lemay
Hardcover
$ 29.95
Out of Stock In Store (Available to Order)

During the turbulent times of the "Wild West," America's farmers, ranchers, and cowboys looked up into the sky and beheld "signs and wonders" that rival any UFO sighting of the modern era. In addition to the airships above them, on the ground below they encountered strange humanoids in possession of futuristic technology, glimpsed unidentified submersible objects in the water, and dug up alien artifacts from the earth. This book doesn't just cover typical airship encounters of the era. It also details sightings of Men in Black, a Reptilian in 1892, and what sound to be underwater dwelling aliens in Pyramid Lake, Nevada After reading this book you'll ask yourself: Was a UFO sighted in Pascagoula, Mississippi, in 1874 related to another sighting there a hundred years later? Were strange lights floating along the train tracks in Edwardsville, Kansas, in 1878 those of a UFO or a Phantom Locomotive? Was an alien spotted in 1880 Kentucky the same specter named Spring-Heeled Jack that terrorized London in the 1830s? And, did a giant sword that fell to earth in New York State in 1883 come from the heavens or another dimension altogether?