Starstruck: My Unlikely Road to Hollywood 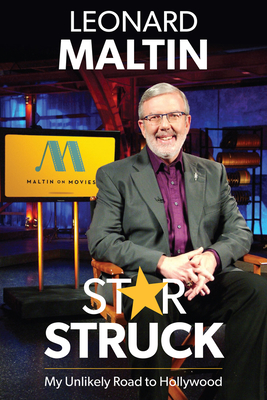 Starstruck: My Unlikely Road to Hollywood

Hollywood historian and film reviewer Leonard Maltin invites readers to pull up a chair and listen as he tells stories, many of them hilarious, of 50+ years interacting with legendary movie stars, writers, directors, producers, and cartoonists. Maltin grew up in the first decade of television, immersing himself in TV programs and accessing 1930s and ‘40s movies hitting the small screen. His fan letters to admired performers led to unexpected correspondences, then to interviews and publication of his own fan magazine. Maltin’s career as a free-lance writer and New York Times-bestselling author as well as his 30-year run on Entertainment Tonight, gave him access to Katharine Hepburn, Elizabeth Taylor, Sean Connery, Shirley Temple, and Jimmy Stewart among hundreds of other Golden Age stars, his interviews cutting through the Hollywood veneer and revealing the human behind each legend. Starstruck also offers a fascinating glimpse inside the Disney empire, and Maltin’s tenure teaching USC’s popular film course reveals insights into moviemaking along with access to past, current, and future stars of film, such as George Lucas, Kevin Feige, Quentin Tarantino, and Guillermo del Toro.

Leonard Maltin is one of the most recognized and respected film critics of our time. He spent 30 years on the hit television show Entertainment Tonight and appears regularly on Turner Classic Movies. An established author, he is best known for his annual paperback reference, Leonard Maltin’s Movie Guide. In 2005, he introduced a companion volume, Leonard Maltin’s Classic Movie Guide (now in its third edition), which focuses on movies made before 1965, going back to the silent era. Leonard’s other books include Hooked on Hollywood, The Best 151 Movies You’ve Never Seen, The Disney Films, Of Mice and Magic: A History of American Animated Cartoons, The Great American Broadcast: A Celebration of Radio’s Golden Age, The Great Movie Comedians, Movie Comedy Teams, The Art of the Cinematographer, Selected Short Subjects and (as co-author) The Little Rascals: The Life and Times of Our Gang. Leonard has been teaching at the USC School of Cinematic Arts for the last 23 years. His popular class screens new films prior to their release, followed by a Q&A with the filmmakers. This direct access to top talent has proven to be invaluable in his students’ own filmmaking endeavors. As an expert and host, he is frequently seen on news programs and documentaries. Leonard is also a prolific freelance writer whose articles have appeared in The New York Times, The Los Angeles Times, The London Times, Smithsonian, TV Guide, Esquire, The Village Voice and American Film. He was the film critic for Playboy magazine for six years. Additionally, Leonard frequently lectures on film and was a member of the faculty of New York City’s New School for Social Research for nine years. He served as Guest Curator at the Museum of Modern Art film department in New York on two separate occasions. Leonard created, hosted and co-produced the popular Walt Disney Treasures DVD series and appeared on Warner Home Video’s Night at the Movies features. He has written a number of television specials, including Fantasia: The Creation of a Disney Classic and has hosted, produced and written such video documentaries and compilations as The Making of The Quiet Man, The Making of High Noon, Cartoons for Big Kids, The Lost Stooges, Young Duke: The Making of a Movie Star, Cliffhangers: Adventures from the Thrill Factory and Cartoon Madness: The Fantastic Max Fleischer Cartoons. In 2006 he was named by the Librarian of Congress to join the Board of Directors of the National Film Preservation Foundation. He also has received awards and citations from the Los Angeles Film Critics Association, American Society of Cinematographers, Anthology Film Archives, The Society of Cinephiles, San Diego Comic-Con International, and the Telluride Film Festival. In 1997 he was made a voting member of the National Film Registry, which selects 25 landmark American films every year. Perhaps the greatest indication of his fame was his appearance in a now-classic episode of the animated series South Park. He holds court at leonardmaltin.com. Follow him on Twitter and Facebook; you can also listen to him on his weekly podcast Maltin on Movies, which he hosts with his daughter, Jessie.