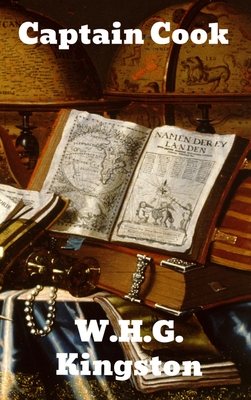 Captain Cook is a classic and definitive biography of the great English explorer, Captain James Cook, by W.H.G. Kingston. This Captain Cook history is not a series of fictitious adventures of the great Captain Cook, the eighteenth century navigator and explorer, but a straightforward statement of his life and achievements. It is therefore more of a biography than an adventure book for boys. However, the man was so great that his biography can indeed be read as a well-written book of adventures.

Captain James Cook FRS was a British explorer, navigator, cartographer, and captain in the Royal Navy. Cook made detailed maps of Newfoundland prior to making three voyages to the Pacific Ocean, during which he achieved the first recorded European contact with the eastern coastline of Australia and the Hawaiian Islands, and the first recorded circumnavigation of New Zealand.Cook joined the British merchant navy as a teenager and joined the Royal Navy in 1755. He saw action in the Seven Years' War, and subsequently surveyed and mapped much of the entrance to the Saint Lawrence River during the siege of Quebec. This helped bring Cook to the attention of the Admiralty and Royal Society. This notice came at a crucial moment in both Cook's career and the direction of British overseas exploration, and led to his commission in 1766 as commander of HM Bark Endeavour for the first of three Pacific voyages.In three voyages Cook sailed thousands of miles across largely uncharted areas of the globe. He mapped lands from New Zealand to Hawaii in the Pacific Ocean in greater detail and on a scale not previously achieved. As he progressed on his voyages of discovery he surveyed and named features, and recorded islands and coastlines on European maps for the first time. He displayed a combination of seamanship, superior surveying and cartographic skills, physical courage and an ability to lead men in adverse conditions.Cook was attacked and killed in 1779 during his third exploratory voyage in the Pacific while attempting to kidnap a Hawaiian chief, in order to reclaim a cutter stolen from one of his ships. He left a legacy of scientific and geographical knowledge which was to influence his successors well into the 20th century, and numerous memorials worldwide have been dedicated to him.