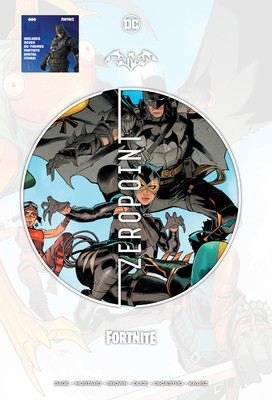 By  Christos Gage , Illustrated By  Reilly Brown
$ 24.99
Out of Stock In Store

Can the World's Greatest Detective solve the mystery of Zero Point and escape the battle royale world of FORTNITE?

When a crack splits above Gotham City, Batman is pulled into a bizarre and unfamiliar world, with no memory of who he is or where he came from...

As he fights to recall his past and escape an endless loop of chaos and struggle, he’ll come face to face for the first time with the likes of Renegade Raider, Fishstick, and Bandolette—as well as others who seem impossibly familiar to him. While the World's Greatest Detective strives to make sense of this strange new world, he’ll uncover the shocking truth about the Island, what lies beyond the Loop, and how everything is connected to the mysterious Zero Point.

Batman/Fortnite: Zero Point uncovers secrets never before revealed in game or anywhere else! Every fan of Batman, Fortnite, stunning art and edge-of-your-seat excitement won't want to miss the Caped Crusader facing off against Fortnite champions on the Island, in a desperate attempt to save not only himself, but other familiar faces from the DCU…and perhaps the Multiverse itself!

New York Times bestselling author Christos Gage is a writer of television (Daredevil, Law & Order: SVU, Hawaii Five-0), comics (Buffy the Vampire Slayer, Spider-Man, Deadshot), graphic novels (Area 10, Sunset), movies (The Breed), and video games (Marvel's Spider-Man, Iron Man VR, Captain America: Super Soldier). He was nominated for a Writer's Guild Award for his work on Marvel's Spider-Man, the bestselling superhero video game of all time. He is a graduate of Brown University and the American Film Institute, from which he received a master's in screenwriting. He often collaborates with his wife, Ruth Fletcher Gage.