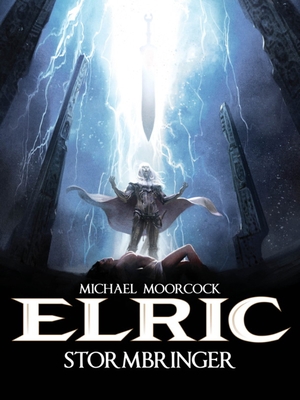 By  Julien Blondel , Illustrated By  Didier Poli , Robin Recht
Hardcover
$ 19.99
Out of Stock In Store

When his people are mercilessly massacred, Elric, the albino former Emperor of the ancient island of Melniboné is cast out into the world. However, fate brings him into the possession of Stormbringer - the fabled, bloodthirsty demon-sword that will sustain him and dominate his destiny.

Elric Vol. 2: Stormbringer is the second instalment of the stunning graphic novel adaptations of Michael Moorcock's most famous work, Elric of Melniboné.

Comic book writer, game author and journalist Julien Blondel worked as a radio host for 14 years before becoming a DJ. In 1994, he abandoned the electronica scene for a career in writing. Since then he's written numerous successful screenplays, comics and short stories.

Didier Poli has worked for various animation studios including Disney studio on the production ofTarzan, and as the Art Director for Kalisto Entertainment. As well as working in comics, he is a sought-after designer and storyboard artist for animated movies and games.