Shades of Magic: The Steel Prince Vol. 3: The Rebel Army 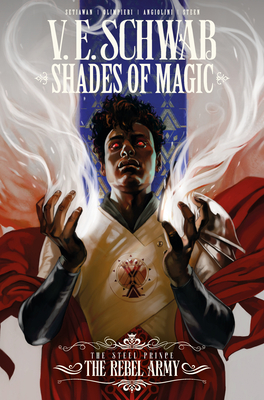 Shades of Magic: The Steel Prince Vol. 3: The Rebel Army

Written by #1 New York Times bestselling author V.E. Schwab and torn from the universe of the Shades of Magic sequence, this third volume in the all-original comic book adventure series sees the saga of the the story begun in The Steel Prince - perfect for fans of bloody, swashbuckling adventure and gritty fantasy!

Once just a single ship, now the pirate fleet of the Rebel Army numbers in its thousands. Made up of traitors from each of the three empires, the fleet, who once made the open waters of the Blood Coast their home, have set their sights on establishing their own land based empire with London as their capital.

The Rebel Army is a battalion made up of traitors to each of the three empires, who've claimed the open waters of the Blood Coast as their territory. Led by a Faroan, a Veskan, and an Arnesian (Rowan, the Antari from the Night of Knives), the RA started as a rag-tag gang, a single ship, but in the last few months, they've gained momentum. Once content to claim the open water as their empire, they've grown in ambition, and scope, and now they're claiming ports, creeping toward a full-on land assault. Their goal? London. But first, they'll have to cross Verose, where Maxim, Isra, and the royal guard are waiting.

V. E. Schwab's first adult novel, Vicious, debuted to critical praise and reader accolades. She is the author of the NYT bestselling Shades of Magic series, as well as a number of MG and YA novels, including This Savage Song. She has been called "the heir to Diana Wynne Jones." Her dynamic work has caught the attention of major TV and film studios.

Schwab has a Masters degree in Art History from the University of Edinburgh. She currently lives in Edinburgh.

Andrea Olimpieri is an up and coming comic book artist based out of
Italy. Andrea has contributed artwork to a number of titles including Dishonored, Mostri, and True Blood.

Enrica Angiolini is a skilled colorist and an accomplished fencer. She has colored for books such as Warhammer 40,000, Doctor Who, Overtaken, Terminator Genysis, and The Order of the Forge. She lives and works in Rome, Italy.