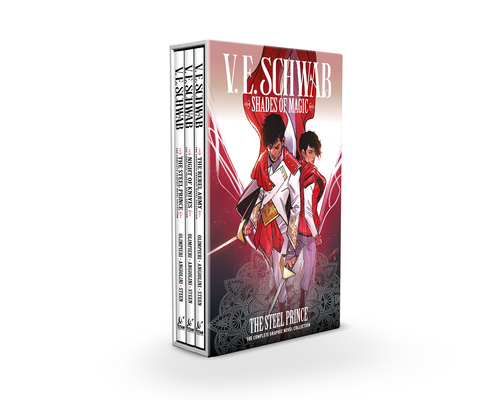 By  V. E. Schwab , Illustrated By  Andrea Olimpieri
Paperback
$ 49.99
Pre-Order (Not Yet Published)

Written by #1 New York Times bestselling author V.E. Schwab and torn from the universe of the Shades of Magic. This three-volume box-set, is the comic book prequel to A Darker Shade of Magic novel and is perfect for fans of bloody, swashbuckling adventure and gritty fantasy. Including art cards featuring the cover art from the individual books.

Delve into the thrilling, epic tale of the young and arrogant prince Maxim Maresh, long before he became the king of Red London and adoptive father to Kell, the lead protagonist of A Darker Shade of Magic The youthful Maresh is sent to a violent and unmanageable port city on the Blood Coast of Verose, on strict orders from his father, King Nokil Maresh, to cut his military teeth in this lawless landscape. There, he encounters an unruly band of soldiers, a lawless landscape, and through a series of incredible adventures learns what it means to be a leader and what it takes to be a future king. This box-set Collects together SHADES OF MAGIC Vol 1: The Steel Prince, SHADES OF MAGIC Vol 2: Night of Knives, SHADES OF MAGIC Vol 3: The Rebel Army.

V. E. Schwab's first adult novel, Vicious, debuted to critical praise and reader accolades. She is the author of the NYT bestselling Shades of Magic series, as well as a number of MG and YA novels, including This Savage Song. She has been called the heir to Diana Wynne Jones. Her dynamic work has caught the attention of major TV and film studios. Schwab has a Masters degree in Art History from the University of Edinburgh. She currently lives in Nashville, TN, but frequents Edinburgh. Andrea Olimpieri is an up and coming comic book artist based out of Italy. Andrea has contributed artwork to a number of titles including Dishonored, Mostri, and True Blood.