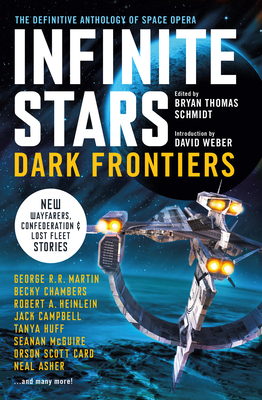 Continuing the definitive space opera anthology series. Today's most popular writers produce new stories set in their most famous universes, alongside essential and seminal short fiction from past masters.

The definitive collection of explorers and soldiers, charting the dark frontiers of our expanding universe. Amongst the infinite stars we find epic sagas of wars, tales of innermost humanity, and the most powerful of desires - our need to create a better world.

Infinite Stars: Dark Frontiers brings you the essential work from past, present, and future bestsellers as well as Grand Masters of science fiction.

Editor Bryan Thomas Schmidt is an author of novels and short fiction, and Hugo-nominated editor. He has edited Alan Dean Foster, Tracy Hickman, Frank Herbert, was the first editor on Andy Weir's The Martian. His anthologies include Infinite Stars, Predator: If it Bleeds, Shattered Shields (with Jennifer Brozek), Beyond the Sun, Raygun Chronicles, and Mission: Tomorrow. He lives in Kansas, USA.