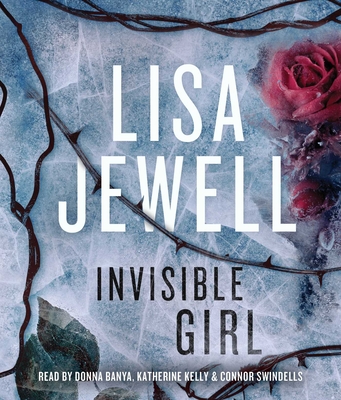 By  Lisa Jewell , Read by  Donna Banya , Katherine Kelly , Connor Swindells
CD-Audio
$ 29.99
Out of Stock In Store (Click to Order)

“I absolutely loved Invisible Girl—Lisa Jewell has a way of combining furiously twisty, utterly gripping plots with wonderfully rich characterization—she has such compassion for her characters, and we feel we know them utterly… A triumph!” —Lucy Foley, New York Times bestselling author

The #1 New York Times bestselling author of Then She Was Gone returns with an intricate thriller about a young woman’s disappearance and a group of strangers whose lives intersect in its wake.

Young Saffyre Maddox spent three years under the care of renowned child psychologist Roan Fours. When Dr. Fours decides their sessions should end, Saffyre feels abandoned. She begins looking for ways to connect with him, from waiting outside his office to walking through his neighborhood late at night. She soon learns more than she ever wanted to about Roan and his deceptively perfect family life. On a chilly Valentine’s night, Saffyre will disappear, taking any secrets she has learned with her.

Owen Pick’s life is falling apart. In his thirties and living in his aunt’s spare bedroom, he has just been suspended from his job as a teacher after accusations of sexual misconduct—accusations he strongly denies. Searching for professional advice online, he is inadvertently sucked into the dark world of incel forums, where he meets a charismatic and mysterious figure.

Owen lives across the street from the Fours family. The Fours have a bad feeling about their neighbor; Owen is a bit creepy and suspect and their teenaged daughter swears he followed her home from the train station one night. Could Owen be responsible? What happened to the beautiful missing Saffyre, and does her disappearance truly connect them all?

Lisa Jewell is the #1 New York Times bestselling author of nineteen novels, including The Family Upstairs and Then She Was Gone, as well as Invisible Girl and Watching You. Her novels have sold over 5 million copies internationally, and her work has also been translated into twenty-nine languages. Connect with her on Twitter @LisaJewellUK, on Instagram @LisaJewellUK, and on Facebook @LisaJewellOfficial.