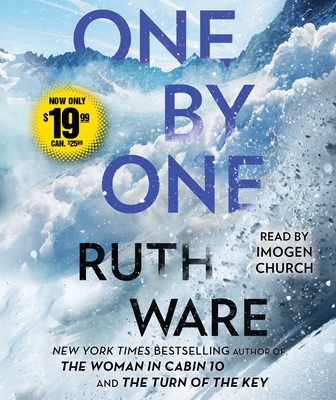 INSTANT NEW YORK TIMES BESTSELLER
“A claustrophobic spine-tingler.” —People
“Not only do Ware’s novels wink at [Agatha] Christie in a saucy way, but Ware herself is turning out to be as ingenious and indefatigable as the Queen of Crime.” —The Washington Post

The #1 New York Times bestselling author of The Turn of the Key and In a Dark, Dark Wood returns with another suspenseful thriller set on a snow-covered mountain.

Getting snowed in at a luxurious, rustic ski chalet high in the French Alps doesn’t sound like the worst problem in the world. Especially when there’s a breathtaking vista, a full-service chef and housekeeper, a cozy fire to keep you warm, and others to keep you company. Unless that company happens to be eight coworkers…each with something to gain, something to lose, and something to hide.

When the cofounder of Snoop, a trendy London-based tech start-up, organizes a weeklong trip for the team in the French Alps, it starts out as a corporate retreat like any other: PowerPoint presentations and strategy sessions broken up by mandatory bonding on the slopes. But as soon as one shareholder upends the agenda by pushing a lucrative but contentious buyout offer, tensions simmer and loyalties are tested. The storm brewing inside the chalet is no match for the one outside, however, and a devastating avalanche leaves the group cut off from all access to the outside world. Even worse, one Snooper hadn’t made it back from the slopes when the avalanche hit.

As each hour passes without any sign of rescue, panic mounts, the chalet grows colder, and the group dwindles further…one by one.

Ruth Ware worked as a waitress, a bookseller, a teacher of English as a foreign language, and a press officer before settling down as a full-time writer. She now lives with her family in Sussex, on the south coast of England. She is the #1 New York Times and Globe and Mail (Toronto) bestselling author of In a Dark, Dark Wood; The Woman in Cabin 10; The Lying Game; The Death of Mrs. Westaway; The Turn of the Key; One by One; and The It Girl. Visit her at RuthWare.com or follow her on Twitter @RuthWareWriter.