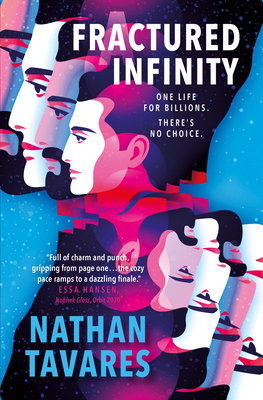 A thrilling race across the multiverse to save the infinite Earths – and the love of your life – from total destruction for fans of The First Fifteen Lives of Harry August, The Time Traveler's Wife and Everything, Everywhere, All at Once.

Film-maker Hayes Figueiredo is struggling to finish the documentary of his heart when handsome physicist Yusuf Hassan shows up, claiming Hayes is the key to understanding the Envisioner – a mysterious device that can predict the future.

Hayes is taken to a top-secret research facility where he discovers his alternate self from an alternate universe created the Envisioner and sent it to his reality. Hayes studies footage of the other him, he discovers a self he doesn’t recognize, angry and obsessive, and footage of Yusuf… as his husband.

As Hayes finds himself falling for Yusuf, he studies the parallel universe and imagines the perfect life they will live together. But their lives are inextricably linked to the other reality, and when that couple's story ends in tragedy Hayes realises he must do anything he can to save Yusuf's life. Because there are infinite realities, but only one Yusuf.

With the fate of countless realities and his heart in his hands, Hayes leads Yusuf on the run, tumbling through a kaleidoscope of universes trying to save it all. But even escaping into infinity, Hayes is running out of space - soon he will have to decide how much he’s willing to pay to save the love of his life.

Nathan Tavares is a writer from Boston, Massachusetts. He grew up in the Portuguese-American community of southeastern Massachusetts and developed a love for fantastical stories at an early age, from superheroes to mythology. He studied English in college and received his MFA in creative writing from Lesley University in Cambridge, Massachusetts. His editorial work celebrates queer culture and historically excluded communities, with pieces appearing in GQ, Out, and elsewhere.