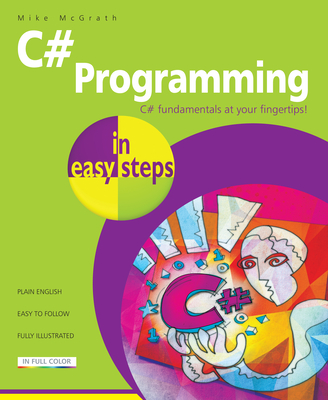 C# Programming in easy steps will teach you to code applications and demonstrates every aspect of the C# language that you will need to produce professional programming results. Its examples provide clear syntax-highlighted code showing C# language basics including variables, arrays, logic, looping, methods, and classes.
The guide begins by explaining how to install the free Visual Studio Community Edition, which creates an environment where you can quickly build your own executable programs by copying the book's examples. It demonstrates all the C# language basics before moving on to provide examples of Object Oriented Programming. The book concludes by demonstrating how you can use your acquired knowledge to create graphic programs for traditional PC Desktop apps and, also, as Universal apps for multiple devices.
C# Programming in easy steps has an easy-to-follow style that will appeal to anyone who wants to begin programming in C# or to the programmer who wants to add C# to his or her skill set. It will also appeal to the hobbyist or student who wants to begin creating apps for their own computers and to those seeking a career in computing who need a fundamental understanding of C# programming.

Mike McGrath gained his extensive knowledge of computer languages while working as a developer contracting to companies around the world. Mike is an established In Easy Steps author with several guides to his credit including: C++; Javascript, Java, Linux, PHP, SQL and Visual Basic Express.