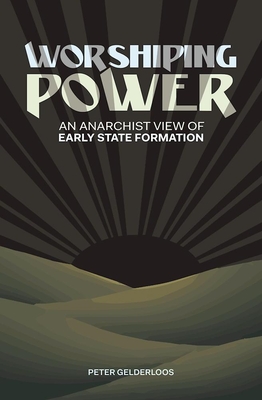 By  Peter Gelderloos
$ 16.00
Out of Stock In Store (Available to Order)

According to Worshiping Power, we need to stop thinking of the State as a potential vehicle for emancipation. From its origins, the State has never been anything other than a tool to accumulate power. This inno-vative and partisan study of human social complexity cuts through in-adequate theories of early state formation to uncover social practices and institutions that have stifled egalitarian forms of self-organization throughout history. Just as importantly, it shows that the difficulties and consequences of state formation are not relegated to prehistory. Despite a ubiquity that renders them almost invisible today, states are constantly trying to augment their power, and all are closer to the brink of collapse than they would like to let on.

Peter Gelderloos is an anarchist writer originally from Virginia. He is the author of How Nonviolence Protects the State, Consensus, and Anarchy Works.
Table of Contents
Introduction
I. Take Me to Your Leader:: The Politics of Alien Invasion
II. Ze Germans: A State-Making Technology
III. Save Me from Yourself: The Statist Spread of Salvation Religions
IV. Sleeper States and Imperial Imaginaries: Authority's Afterlife and Reincarnation
V. The Modern State: A Revolutionary Hybrid
VI. Zomia: A Topography of Positionality
VII. Chiefdoms and Megacommunities: On the Stability of Non-State Hierarchies
VIII. They Ain't Got No Class: Surpluses and the State
IX. All in the Family: Kinship and Statehood
X. Building the Walls Higher: From Raiding to Warfare
XI. Staff and Sun: A New Symbolic Order
XII. A Forager's Mecca: Dreams of Power
XIII. From Clastres to Cairo to Kobane: Learning from States
Bibliography
Index

Peter Gelderloos: Peter Gelderloos is an anarchist writer originally from Virginia. He is author of How Nonviolence Protects the State, Consensus, and Anarchy Works.