Resisting Illegitimate Authority: A Thinking Person's Guide to Being an Anti-Authoritarian--Strategies, Tools, and Models 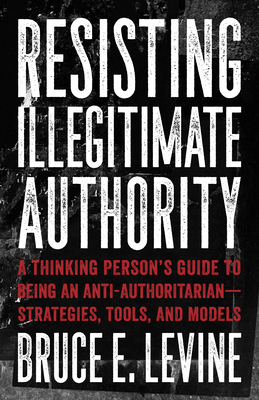 Resisting Illegitimate Authority: A Thinking Person's Guide to Being an Anti-Authoritarian--Strategies, Tools, and Models

By  Bruce E. Levine
Paperback
$ 18.00
Out of Stock In Store (Available to Order)

The capacity to comply with abusive authority is humanity's fatal flaw. Fortunately, within the human family there are anti-authoritarians--people comfortable questioning the legitimacy of authority and challenging and resisting its illegitimate forms. However, as Resisting Illegitimate Authority reveals, authoritarians attempt to marginalize anti-authoritarians, who are scorned, shunned, financially punished, psychopathologized, criminalized, and even assassinated.

Profiling a diverse group of U.S. anti-authoritarians--including Thomas Paine, Ralph Nader, Malcolm X, and Lenny Bruce--in order to glean useful lessons from their lives, Resisting Illegitmate Authority is the first self-help manual for anti-authoritarians. Discussing anti-authoritarian approaches to depression, relationships, and parenting, it provides political, spiritual, philosophical, and psychological tools to help those suffering violence and marginalization in a society whose most ardent cheerleaders for "freedom" are often its most obedient and docile citizens.

Bruce E. Levine is a regular contributor to CounterPunch, Truthout, Z Magazine, AlterNet, Salon, and the Huffington Post. He is a practicing clinical psychologist often at odds with the mainstream of his profession, and he is on the editorial advisory board of the journal Ethical Human Psychology and Psychiatry and on the scientific advisory board of the National Center for Youth Law. A longtime activist in the mental health treatment reform movement, he is a member of the International Society for Ethical Psychology & Psychiatry. His books include Get Up, Stand Up; Surviving America's Depression Epidemic; and Commonsense Rebellion.