Hitler As the Anti-Christ of This Age, the Jews, the Gays, the Other-Abled, the Coming Messianic-Age and the Last Day 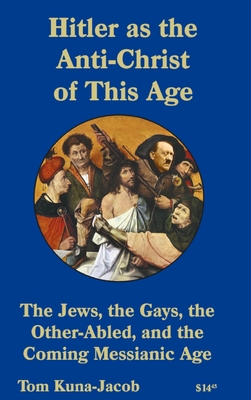 Hitler As the Anti-Christ of This Age, the Jews, the Gays, the Other-Abled, the Coming Messianic-Age and the Last Day

Hitler was the anti-Christ; only his name in Hebrew Letters matches "666" (where the numbers are in the 100's) there is no new Anti-Christ Predicted for this time; but one for the Last Days, at the time when the stars are to be rolled up like a scroll. In this Title, we show how much of "Daniel's" and "Revelation's" prophecies were fulfiled, by WW I, and are not scheduled for repeat now. (Except for the danger of WW III -- around the specific fulfillments of Zecharia 6). Meanwhile, G-d says to the "two witnesses" (both NATO and the CIS; and the Two Testaments): "Come-up Hither ", for Humanity is called to be a "Space-faring" species (which some of us alreadty are; when our Consciousness/Spirit projects outside the body and surfs the Gravitational, and Electro-Magnetic Waves of Love of the Universe at faster than the speed of light to the very perimeter of the Universe, as respected Harvard Neurosurgeon Dr. Evan Alexander did in his book: "Proof of Heaven..", as well as St. Paul to the Third Heaven, and Mohammed in his "Night Journey") to co-operate with God in building part of the New Jerusalem: especially the "12 Pearly Gates", by laser-light from a stationary Laser pointing laser light "7 times brighter than the sun" at right angles from the plane of our galaxy; and fixed in space with photon-solar-wind-catching sails rather than by centrifugal force in an orbit around Sol (the scientific name for our sun)., as described in the book: 'Peace Process in the Holy Land".. In this book; and in the book: "Social-Justice and the Multi-Racial Working Class.." there is a 14-point program for Human Solidarity among all Races of man-kind.