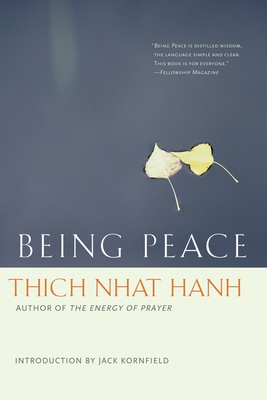 By  Thich Nhat Hanh , Introduction by  Jack Kornfield
Paperback
$ 14.95
Likely On Our Shelves

A bestseller with over 250,000 copies sold, Being Peace is the seminal founding work by Zen Master and Nobel Peace Prize nominee Thich Nhat Hanh. With a new introduction by Jack Kornfield and the first update since its release over fifteen years ago, this eloquent meditation on "being peace in order to make peace" is more relevant than ever. A book for everyone concerned about the state of the world and the quality of our lives, it has lost none of its timeliness since it was first published in 1987. It is filled with practical suggestions how to create a more peaceful world "right in the moment we are alive." Contains Thich Nhat Hanh's key practices, including a guide to the practice of reconciliation which has become a peacemaking tool in many other religious traditions.

This beautiful, newly revised edition is the perfect starting point for those who are getting their first introduction to Buddhism as well as a must-have for those already engaged in the tradition.

With illustrations by Mayumi Oda.

Thich Nhat Hanh was a world-renowned spiritual teacher and peace activist. Born in Vietnam in 1926, he became a Zen Buddhist monk at the age of sixteen. Over seven decades of teaching, he published more than 100 books, which have sold more than four million copies in the United States alone. Exiled from Vietnam in 1966 for promoting peace, his teachings on Buddhism as a path to social and political transformation are responsible for bringing the mindfulness movement to Western culture. He established the international Plum Village Community of Engaged Buddhism in France, now the largest Buddhist monastery in Europe and the heart of a growing community of mindfulness practice centers around the world. He passed away in 2022 at the age of 95 at his root temple, Tu Hieu, in Hue, Vietnam.