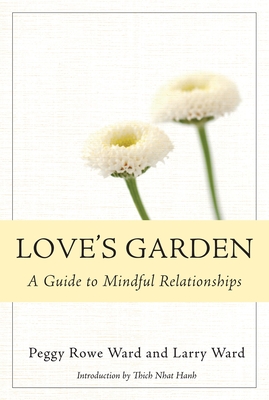 A collection of real-life Buddhist love stories, with commentary and guided exercises for couples developed by Peggy Rowe-Ward and Larry Ward, senior students and ordained Dharma teachers in the tradition of Zen Master Thich Nhat Hanh. These personal stories, from couples of a range of different ages and experiences, illustrate how Buddhist principles can help couples navigate any stage of their relationship.

It took the authors some good living and good loving before they realized that the love that they were seeking was already present and available in the depths of their hearts and mind. Love does not depend on anything that is happening "Out There" and is not dependent on anything "he" or "she" might do. It depends on our own willingness to look within and to act. This insight is a result of practicing the teachings of the Buddha on right diligence and right effort. The authors have been studying and practicing with Zen master Thich Nhat Hanh and they are happy to report that the practices work.

In <i<Love's Garden the authors offer key practices such as "The Three Keyes" (see excerpt) for the transformation of suffering and the establishment of happiness. These practices have helped them see each other’s happiness as their own. They share stories and illustrations from their own life and also and those of their friends and students.

"The practice is not difficult. We simply need to get in touch with and nourish the practices that are helping us to experience peace. And then we need to stop doing the things that keep us from experiencing peace." Larry Ward

Peggy Rowe Ward received Dharma teacher Transmission form Thich Nhat Hanh in 2000 at Plum Village, France. She has a Doctorate in adult education and a Master’s degree in counseling psychology. She has published in professional adult education journals on women’s stories of coming into voice, Her doctoral publications are connected to community centered dreamwork. She has had short essays published in In Our Own Voice (1992) and in The Mindfulness Bell. She co-authored Making Friends with Time (2000) with Tracy Sarriugarte.

Larry Ward has celebrated over 30 years as a Christian minister. He received Dharma teacher transmission from Thich Nhat Hanh in 2000 in Plum Village, France. Larry was an executive director in an international organization engaged in human development programs in 52 countries. He has lived for extended periods in Hong Kong, India, and the Caribbean. He has published articles and poems for Emerging Lifestyles, Edges, and The Mindfulness Bell magazines. In 2006 he was commissioned by the United Nations to write a paper on mindfulness and leadership.