A Very Private Diary: A Nurse in Wartime 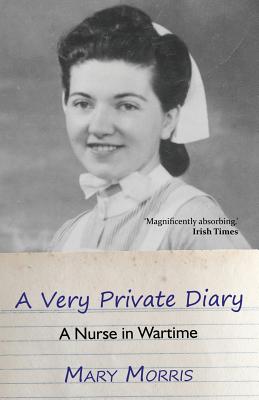 A Very Private Diary: A Nurse in Wartime

'Scrupulously edited by Acton, A Very Private Diary conveys a woman's role in wartime with integrity, humour and pity. As well as being magnificently absorbing, the diary serves as a tonic, so unlike outsized histories of war by academics and others who had not been there.' - Irish Times

'It was flagrantly against the rules for a member of the Armed Forces to keep a diary - but then Mary never had much time for rules. However, it was not just a rebellious spirit that drove her to her secret writing but a deep sense of duty to the injured soldiers who shared their experiences with her.' - Irish Mail on Sunday 'Mary is a talented writer and a humane observer of her remarkable experiences. Her diary is full of vivid, sometimes shocking vignettes.' - Daily Mail 'In pithy, occasionally sardonic entries, Morris builds a picture of the pity of war and, above all, the moral and material ruins of post-Hitler Germany, where she danced the nights away in Allied officers clubs but also got to know the stench of diphtheria ("so foul and sickly") and gangrene. The scenes of horror and distress she recorded are leavened by childhood reminiscences of the Connemara coast and the glories of whiskey fruit cake.' - Irish Times 'On the so called 'Home Front' in the time before her enlistment, Mary records the struggles of civilian life as a nurse in a country at war. From dodging bombs throughout the Blitz to single-handedly looking after wards full of seriously ill children, the daily battles of life in England are by no means diminished by later tales of Normandy and the Front.' - Irish Mail on Sunday The impulse for adventure that sent Mary Mulry (later Morris), a young Irish woman from County Galway, to train as a nurse in England in 1939 would see her landing in the heels of the Normandy invasion as a member of the Queen Alexandra's Imperial Nursing Service Reserve (QAs) in June 1944. Mary's diary gives us vivid stories of nursing and romance from her first encounter with wounded soldiers from the evacuation of Dunkirk, to narrowly escaping with her life in the London Blitz, and contracting diphtheria while caring for dangerously ill children in a London hospital. Keeping a diary on active service was forbidden, but by her own admission Mary never had much time for rules, and when she lands in Normandy in June 1944 we are immersed in her exhausting work at a tent hospital in Normandy. A few months later she unsparingly recounts her soldier-patients' horrific stories of the Battle of Arnhem, and in the aftermath of war documents both the desolation of a bombed out Europe and the physical and mental injury that remain even when the war is over. Yet Mary does not succumb to despair - in spite of the suffering she has witnessed she retains a love of life allows her to imagine a future beyond war.

Mary Morris (nee Mulry) was born in County Galway, Ireland in 1921. After completing her nursing training in London in 1944 she joined the Queen Alexandra Imperial Nursing Service Reserve. She married Captain Malcolm Morris in 1946 and settled in Britain. She died in 1997. Carol Acton is Associate Professor of English at St Jerome's University at the University of Waterloo, Canada, specialising in war writing, especially that of woman and medical personnel. She first encountered Mary's diary when working in the Imperial War Museum archives."