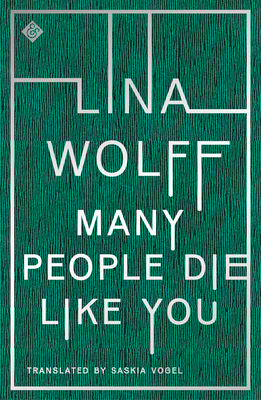 In this collection from the winner of Sweden's August Prize, Lina Wolff gleefully wrenches unpredictability from the suffocations of day-to-day life, shatters balances of power without warning, and strips her characters down to their strangest and most unstable selves. Wicked, discomfiting, delightful and wry, delivered with the deadly wit for which Wolff is known, Many People Die Like You presents the uneasy spectacle of people in solitude, and probes, with savage honesty, the choices we make when we believe no one is watching ... or when we no longer care.

Swedish writer Lina Wolff has lived and worked in Italy and Spain. During her years in Valencia and Madrid, she began to write her short story collection Many People Die Like You. Bret Easton Ellis and the Other Dogs, her first novel, was awarded the prestigious Vi Magazine Literature Prize and shortlisted for the prestigious 2013 Swedish Radio Award for Best Novel of the Year. It was published by And Other Stories in 2018, followed by her second novel, The Polyglot Lovers, in 2019. Wolff now lives in southern Sweden. Saskia Vogel is an author and translator from Los Angeles, now living in Berlin. Permission, her debut novel, has been published in English, Spanish, French and Swedish. She has translated leading Swedish authors such as Karolina Ramqvist, Katrine Marcal, and Lena Andersson. Her translations and writing have appeared in publications such as Granta, Guernica, The White Review, The Offing, Paris Review Daily, and The Quietus. Her translation of Lina Wolff's The Polyglot Lovers was awarded the English PEN Translates award.