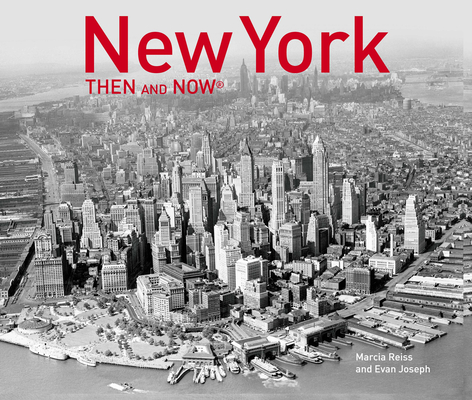 Pairing classic archive photos with their modern viewpoint, New York Then and Now shows the dramatic changes that have transformed the city that never sleeps.

The latest version of Pavilion's top-selling North American title New York Then and Now has been fully revised and updated for 2019. Photographed by one of the city's leading architectural photographers and authored by the doyenne of popular New York histories, Marcia Reiss, the book shows the everchanging nature of the city's streetscapes.

All the familiar New York landmarks are included, starting with Governors Island and Liberty Island with Liberty Enlightening the World, then moving inland from Castle Clinton and Battery Park through Manhattan to Central Park and beyond. There are the sites that have hardly changed in the last century (Ellis Island, US Custom House, Wall Street, Central Park), there are those that have disappeared entirely (Pennsylvania Station, Waldorf Astoria, the Singer Building), and there are those that never stop changing from week to week (Times Square).

This latest version for 2019 includes more vintage color, along with new "Now" photography to bring the title right up to date.

Marcia Reiss is the author of Central Park Then and Now (2010); Manhattan in Photographs (2005); Architecture in Detail: New York (2003); Brooklyn Then and Now (2002); and a series of guides to historic Brooklyn neighborhoods for the Brooklyn Historical Society. She was Policy Director of the Parks Council, now New Yorkers for Parks, and previously Public Affairs Director for the New York City Department of Ports and Trade. She also taught at Columbia University and Hunter College, and was a reporter for the Brooklyn Phoenix. She and her husband are former residents of Brooklyn and Manhattan and now live in upstate New York. Evan Joseph is a leading New York architectural photographer. His work is regularly featured in Architectural Digest, The New York Times, The Wall Street Journal, and many other publications around the world. His latest book is New York From Above.