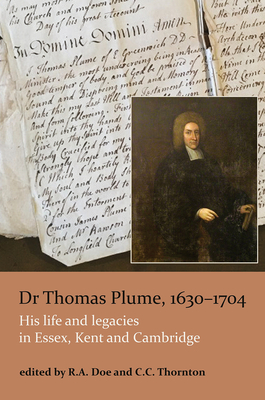 Dr Thomas Plume, born in Maldon in Essex in 1630, is remembered today for the many bequests he left which established important scientific, religious, and cultural charities. Still operational today are the Plumian Professorship of Astronomy at Cambridge University, the Plume Library at Maldon, and the Plume Trust for poor clergy in the Diocese of Rochester. This volume provides the first comprehensive account of the life, work, and philanthropy of Plume. Educated at Chelmsford Grammar School and Christ’s College, Cambridge, Plume was vicar of Greenwich from 1658 and archdeacon of Rochester from 1679, holding both posts until his death in 1704. At Greenwich he was noted favourably for his preaching by Samuel Pepys and John Evelyn on more than one occasion. He died a wealthy man and his will contained 79 bequests. Plume’s famous library at Maldon still houses some 8000 books and pamphlets, as well as his pictures and manuscripts. The book collection, forming one of the largest private libraries of the period, is an important resource for understanding the Enlightenment, whilst the manuscript collection reveals Plume’s intellectual roots in the religious, philosophical, and political debates of the mid-seventeenth century. The landmark building itself, a partly converted and rebuilt medieval church, is an important example of a late-seventeenth-century purpose-built library. As vicar of Greenwich, archdeacon of Rochester, and prebendary of Rochester cathedral, Plume had equally strong links with Kent, owning an estate at Stone Castle, Dartford. In Cambridge the chair he endowed for ‘a learned and studious Professor of Astronomy and Experimental Phylosophy’ has been held by many notable scientists, including Fred Hoyle and Martin Rees. In contextualising Plume’s bequests within the intellectual world of the late seventeenth century, the book reveals the connections between his philanthropy and his family background and education, his wealth, career and patrons, his churchmanship and his character. Having lived in a significant period of religious tumult and intellectual debate, Plume’s legacy is both to have influenced the accretion of knowledge for over three hundred years and also to have illuminated his own times.

Tony Doe is a Trustee of the Plume Library with a particular interest in the churchmanship of Thomas Plume. Christopher Thornton is County Editor of the Victoria County History of Essex and has published many scholarly articles on medieval economic history and local history. He is a Vice-President of the Essex Society for Archaeology and History and Chairman of the Friends of Historic Essex.