For a Parliament Freely Chosen: The Rebellion of Sir George Booth, 1659 (Century of the Soldier) 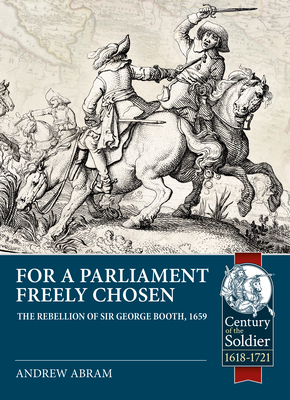 For a Parliament Freely Chosen: The Rebellion of Sir George Booth, 1659 (Century of the Soldier)

Grounded in primary archival research and published sources, this book provides a focused, and up-to-date assessment of the rebellion aimed at overthrowing the recalled Rump Parliament, led by Sir George Booth in 1659. Although nominally part of a wider 'revolt' against the Cromwellian State, following the resignation of Richard Cromwell and the ending of the Protectorate, it has been usually regarded as a localized 'royalist' uprising aimed at restoring the Stuart Monarchy. As such, the reasons for the armed rebellion, in terms of the political, religious, and military objectives of its leaders, backers and participants have been often misunderstood or misrepresented. In a national and local context, there has been something of a lacuna in focused approaches to the topic over the past half a century.

For a Parliament Freely Chosen challenges the view that the rebellion was local in nature, and poorly led, planned, and executed. Stress is placed on identifying and reconstructing the background, contacts and actions of Booth and the forces under their command, while reassessing the military aspects of the revolt in Cheshire and its adjacent counties. The book adds significantly to our knowledge of the causes, events and perceptions of the Booth rebellion, and will appeal to anyone with an interest in the Protectorate that followed the Wars of the Three Kingdoms and reactions to it, as well as the circumstances that contributed to the Restoration of the Stuart Monarchy in 1660. This includes academics, local historians, re-enactors and wargamers.