To Settle the Crown: Waging Civil War in Shropshire, 1642-1648 (Century of the Soldier) 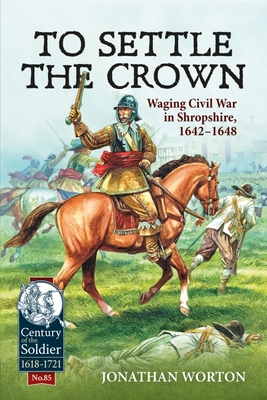 To Settle the Crown: Waging Civil War in Shropshire, 1642-1648 (Century of the Soldier)

While the First, or 'Great', English Civil War of 1642-46 was largely contested at regional and county level, in often hard-fought and long-lasting local campaigns, historians often still continue to dwell on the well-known major battles, such as Edgehill and Naseby, and the prominent national leaders. To help redress this imbalance, To Settle The Crown: Waging Civil War in Shropshire, 1642-1648 provides the most detailed bipartisan study published to date of how the war was actually organized and conducted at county level.

This book examines the practicalities, the 'nuts and bolts', of contemporary warfare by reconstructing the war effort of Royalists and Parliamentarians in Shropshire, an English county on the borderland of Wales - a region that witnessed widespread fighting. Shropshire was contested during the First Civil War - when it became one of the most heavily garrisoned counties in England and Wales - and experienced renewed conflict during the Second Civil War of 1648. Based on a doctoral thesis, and therefore drawing primarily on contemporary sources revealing much new information, this book examines key aspects of the military history of the English Civil Wars: allegiance and motivation; leadership and administration; recruitment and the form of armed forces; military finance; logistics; and the nature and conduct of the fighting. Furthermore, while previous studies have tended to concentrate on the Parliamentarians, the comparatively plentiful evidence from Shropshire has allowed the Royalist war effort there to be reconstructed in rare detail.

This book reveals for the first time the extent of military activity in Shropshire, describing the sieges, skirmishes and larger engagements, while reflecting on the nature of warfare elsewhere across Civil War England and Wales. In also providing a social context to the military history of the period, it explains how Royalist and Parliamentarian activists set local government on a wartime footing, and how the populace generally became involved in the administrative and material tasks of war effort.

Extensively illustrated, fully referenced to an extensive bibliography, and including a useful review of Civil War historiography, To Settle The Crown: Waging Civil War in Shropshire, 1642-1648 is a significant fresh approach to the military history of the English Civil Wars.