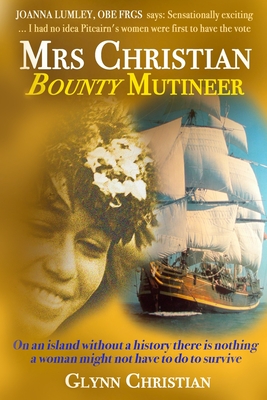 Meet Mrs Christian, a real-life 18th century heroine of rebellion, women's rights and democracy.This is the bloodthirsty, true story of Mauatua Christian and the 11 other revolutionary Ma'ohi women of HMAV BOUNTY, the foremothers of Pitcairn Island. They succeeded where the mutineers failed and in 1838 became the first women in the world to have their full right to vote written into law, more than 80 years before just some British women over 30 were franchised......."Congratulations It was fun and easy to read, and sheds tremendous light on the Pitcairn story. Sizzling sex scenes ": Distinguished Professor Dame Anne Salmond, South Pacific anthropologist and author"I read it with intense interest and fascination . . . not only a thoughtful but also a gripping and moving story, with wide implications. . . how much I admire your impressive achievement . . .": Rolf DuRietz, Bounty scholar......After a failed attempt to settle on Tubuai Island mutineer Fletcher Christian finally reaches uninhabited Pitcairn Island aboard BOUNTY in January 1790. Tahitian beauty Mauatua is with him, escaping the cruel, male-dominated life of Tahitian women. Together they hope to realise their joint dream of a better, more equal world for women and men.Stranded when the ship mysteriously burns, Pitcairn's Ma'ohi women endure and sometimes motivate unspeakable brutality to secure and then to protect two of womanhood's most precious rights, the right to bear children and the right of those children to a life of loving security.Once they resort to such extreme measures Mauatua knows these secrets must never be told, not even to their children. The women rewrite Pitcairn Island's violent history.Pitcairn Island is rediscovered in 1808. Only one mutineer is left alive and a living reminder of Mauatua's past life on Tahiti challenges her certainties about everything she has done to protect Pitcairn's children. After the community's brief and deadly return to Tahiti in 1831, where the Pitcairners are tragically abandoned by Church and Governments, she is forced to disclose the truth about Pitcairn's two greatest mysteries.Who did massacre Pitcairn's white and black men, and why? What did happen to Fletcher Christian?By telling her secrets Mauatua/Mrs Christian subjects herself to the judgment and outrage of those she fought hardest to protect, her own children.