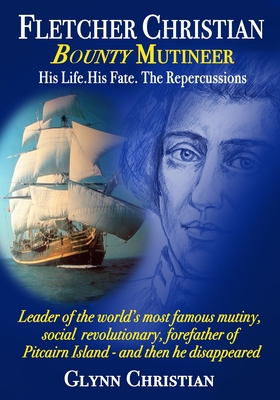 FULLY ILLUSTRATED IN BLACK AND WHITE WITH MORE THAN FIFTY IMAGES, MANY NEVER BEFORE PUBLISHED, this completely revised edition features new images, new facts and new conclusions that give fresh perspectives to Fletcher's social status and background and explain how these impact on the psychology behind his special friendship with William Bligh and how this turned to tragic personal betrayal on April 28th, 1789. And how his ideas of social revolution led to Pitcairn Island's women being first in the world to have the vote.Follow the sweep of young Fletcher Christian's extraordinary life from Cumbria and the Isle of Man to India, Cape Horn, Tahiti and then to the world's most famous mutiny in HMAV BOUNTY, to his almost forgotten settlement of Fort George on Tubuai, his long South Pacific search for a hidden home and to oblivion on his Pitcairn Island hideout. Still Fletcher Christian's only biography, the book explains why there was never a mutiny of BOUNTY but was a revolt of one man against another, Christian against Bligh.As well as the shocking truth about conditions aboard BOUNTY and how Bligh behaved on a second breadfruit expedition, this book also reveals what Fletcher discovered about Tahitian women's brutal life of infanticide, facial reshaping, food restrictions and more. BOUNTY's women, including his wife Mauatua, were not kidnapped but eagerly escaped with Fletcher Christian and were later willing to entirely reshape their lifestyles, endure bloodshed and massacre on Pitcairn Island to protect their children and to follow Fletcher's legacy of social revolution, eventually becoming first women in the word to have the vote. But who really burned BOUNTY and why are there so many versions of Fletcher Christian's fate? Did he escape and secretly return to Cumberland? Fletcher Christian's descendant Glynn Christian investigates his ancestor's life, his mutiny and the repercussions more thoroughly than any other author has done and finally sails in the wake of Fletcher Christian to Pitcairn Island hoping to solve the mysteries of his fate. This reality-packed narrative proves fact is stranger and more thrilling than fiction, even after two centuries, and further enhances FRAGILE PARADISE, Glynn Christian's widely acclaimed and respected earlier telling of the life of Fletcher Christian BOUNTY Mutineer.