Men in This Town: A Decade of Men's Street Style 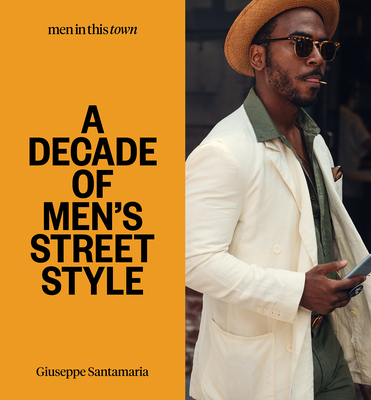 Men in This Town: A Decade of Men's Street Style

By  Giuseppe Santamaria
$ 40.00
Likely On Our Shelves

A selection of the best of men's street fashion, through the last ten years.

For the last decade, Giuseppe Santamaria has observed and recorded the men of big cities while they cross streets, sit at cafes, and pose, momentarily, on busy sidewalks. Traveling the continents, Giuseppe has documented the evolution of men's identities, communicated through their attitude and style as they move through their different concrete jungles.

With photos shot in Sydney, New York, Tokyo, Milan, London, Melbourne, Toronto, L.A., Madrid, Florence, and Paris, this collection is a truly global retrospective of men's street fashion. Filled with striking photographs, Men In This Town is a record of the men who stick out in a crowd with their particular sense of just who and what they are.

For anyone with a love of photography, fashion, or culture's evolution, Giuseppe's photography collection is a must have.

Giuseppe Santamaria is a Sydney-based writer, fashion photographer, and creator of Men in This Town. Traveling the globe, he photographs and features street fashion across the big cities on his blog and in his magazines. He has previously published several books.