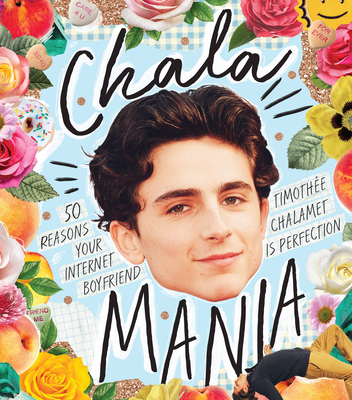 This doting book is a beautifully illustrated celebration of the world's most beautiful boy--like the Tumblr account your Chalamet-filled heart has always wanted.

This book is a chic love letter to the shaggy-haired, angelic-cheekboned heartthrob: Timothée Chalamet. It's author Billie Oliver's very own De Profundis that's not at all creepy - just celebratory. Well maybe a little creepy, but if it results in Timothée reaching out to Billie and her getting his number, that's certainly worth a little creeping.

The world has fallen in love with Timothée Chalamet, thanks largely to his skillful performances in films like Lady Bird, Call Me By Your Name, Beautiful Boy and Little Women. But it isn't just Timothée's acting chops that have won him the world's--particularly, the Twitter and Instagram world's--devotion... Clearly, the aforementioned cheekbones go a long way, as does his floppy hair and dreamy grin. But do you know he speaks French? That he takes red-carpet selfies with Glenn Close? Or that he takes consistently bold risks on every red carpet, fashion-wise? (We all remember the Louis Vuitton sequined harness.) That he's happy to talk about that time he cried watching Interstellar for the first time because he thought his part was bigger? And that he brought his sister as his date to the Golden Globe Awards?

There are so many reasons to be crushing on Timothée Chalamet right now, so let us indulge the Chalamania and count just fifty of the things we adore about him most. And Timothée, if you're reading this--call me.

Billie Oliver is a film critic and freelance journalist. She's a bona fide pop-culture junkie and definitely loves Timothée Chalamet even more than you do.