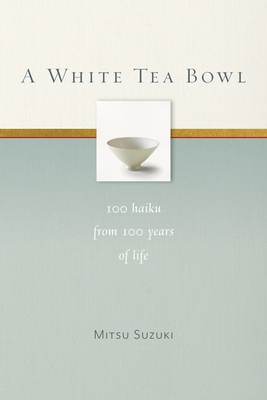 By  Mitsu Suzuki , Editor  Kazuaki Tanahashi , Translated by  Kate McCandless
$ 16.95
Out of Stock In Store

Mitsu Suzuki is the widow of Shunryu Suzuki Roshi, the Zen monk who founded the San Francisco Zen Center and helped popularize Zen Buddhism in the United States. A White Tea Bowl is a selection of her poems, written after her return to Japan in 1993. These 100 haiku were chosen by editor Kazuaki Tanahashi and translated by Zen teacher Kate McCandless to celebrate Mitsu's 100th birthday on April 27, 2014. The introduction by Zen poet and priest Norman Fischer describes with loving detail a meeting with Mitsu at Rinso-in temple in 2010, considers the formative impact of war in Japan and social upheaval in America on her life, and places her poetry in the evolution of haiku as an international form.

Mitsu Suzuki is the widow of Shunryu Suzuki Roshi, founder of San Francisco Zen Center. After he passed away in 1971, she remained at Zen Center where she taught tea ceremony and began writing poetry. Her first collection of haiku, Temple Dust, was published in 1992.