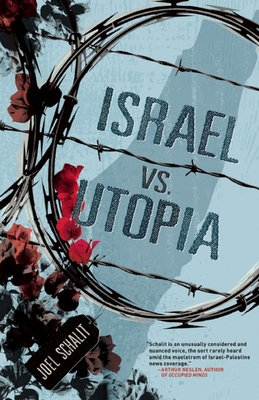 Israel is a synonym for many things: the ancestral home of the Jewish people, the hell of the Palestinians; the realization of a centuries-old dream of freedom, and the heart of the War on Terror. No country inspires as much debate about its rights and wrongs, its legitimacy and illegitimacies, than Israel. Historically associated with Europe, such debate finally became common in the U.S. during the Bush era, as America deepened its involvement in the region, and Israel fought three wars.

In his new book, Israel vs. Utopia, Israeli American journalist Joel Schalit distinguishes between the Israel he knows, and the image of it that exists in the imagination of Americans. Israel is a state of mind, Schalit argues, as much as it is its own sovereign state. Exploring this tension, in America, in Israel, employing a combination of personal observation, political, and cultural commentary, Schalit defines the instability of Israel, as a metaphor, and America's troubled love for it, as only an Israeli American would know.

Joel Schalit is a writer and editor based in Berlin, Germany. The author of the critically-acclaimed Jerusalem Calling, and the editor of several collections including The Anti-Capitalism Reader, Schalit has edited some of America's most influential independent magazines, including Punk Planet, Tikkun, and the legendary '90s e-zine, Bad Subjects. His work has also appeared in AlterNet, the Forward, openDemocracy, and the Guardian. Schalit currently comments on Mideast politics for French global news broadcaster France 24, and is the editor of Seattle's new politics and culture daily, Souciant.