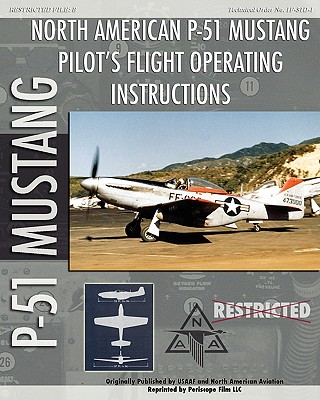 By  United States Army Air Force
Paperback
$ 16.95
Out of Stock In Store (Available to Order)

Used primarily as a long-range bomber escort in raids over Germany, the North American P-51 Mustang earned a reputation for toughness and agility in dogfights. Carrying a two-stage supercharged V-12 Merlin engine and armed with six .50 caliber machine guns, the P-51 helped the Allies gain air superiority in the skies over Europe. P-51s were flown by the famed Tuskegee Airmen, and remained in service during the Korean War. World airforces made extensive use of the Mustang, some into the 1980's. Originally published by North American Aviation and the U.S. Army Air Force in 1945, this manual was originally classified "Restricted". It was declassified long ago and is here reprinted in book form. This affordable facsimile has been reformatted, and color images appear as black and white. Care has been taken to preserve the integrity of the text.