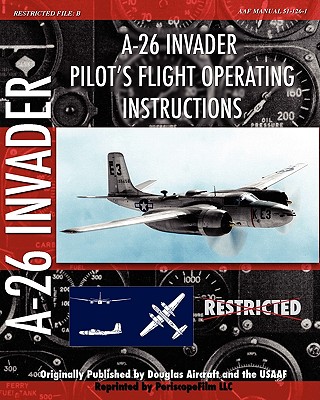 One of the few aircraft to fly in three wars - WWII, Korea and Vietnam - the Douglas A-26 / B-26 Invader gained fame as a light bomber. Designed by engineer Ed Heinemann, the XA-26 prototype first flew in 1942 and flew combat missions beginning in June of 1944. Two versions were produced: a heavily-armed solid nose "B" model and a glass nose "C" model for precision high altitude bombing. More than 2400 were built, serving with distinction in both the Pacific and European Theaters. Redesignated the B-26 (not to be confused with the B-26 Marauder), Invaders saw combat in Korea and are credited with destroying over 38,000 vehicles and over 4000 locomotives and railway cars. The French flew the aircraft in Indochina, and the USAF and CIA used it during the Vietnam conflict. B-26's also flew in the ill-fated Bay of Pigs Invasion in 1961. Originally printed by the USAAF, this A-26 pilot's manual is chock full of information about one of history's great planes. This affordable facsimile has been reformatted. Care has been taken to preserve the integrity of the text.