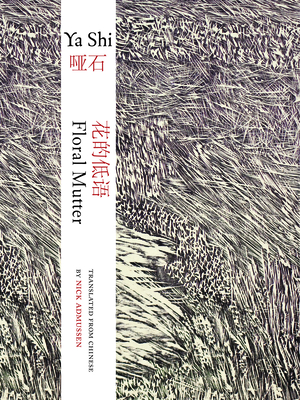 Ya Shi, an "outsider" poet, who teaches math and lives 1,000 miles from the Beijing literary scene, is celebrated among lovers of Chinese poetry from the conservative to the avant-garde. This bilingual (Chinese/English) collection draws together jagged and intense short lyrics, wild nature sonnets, and genre-bending prose poetry from across his career. His work is rooted in the independent spirit, folk imagination and tough music of the people of Sichuan, and combines iconoclasm and heart to demonstrate what's possible in Chinese poetry today.

YA SHI, born in 1966, grew up during the Cultural Revolution and studied mathematics at Beijing University. He embarked on his poetry career in 1990, becoming the editor of an influential underground magazine, winning the prestigious Liu Li'an prize, and publishing several collections of poetry through official and unofficial channels. By remaining in Sichuan province most of his adult life, he has eschewed the Beijing literary scene, and works mainly in seclusion from a larger literary community, engaging with readers online and through the samizdat publications of south China. He has gained a significant following in China of people attracted to his imagination and daring writing. He teaches mathematics in a city near Chengdu. Translator NICK ADMUSSEN is an assistant professor of Chinese literature at Cornell University. His scholarly book, Recite and Refuse: Contemporary Chinese Prose Poetry, was published by Hawaii University Press in 2017, and his translations of poems by Nobel Prize winner Liu Xiaobo appeared in No Enemies, No Hatred: Selected Essays and Poems by Liu Xiaobo (Harvard University Press, 2012). He is an essayist, poet, and translator, and his writings have appeared in Privacy Policy, Boston Review, Queen Mab's Teahouse and elsewhere.