In the Meadow of Fantasies 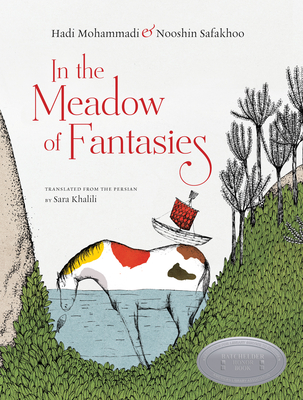 In the Meadow of Fantasies

By  Hadi Mohammadi , Illustrated By  Nooshin Safakhoo , Translated by  Sara Khalili
$ 20.00
Out of Stock In Store (Available to Order)

Written by the winner of IBBY's Best Book Award, Mohammad Hadi Mohammadi, In the Meadow of Fantasies is one girl's luminous escapade into a land of seven mysterious horses.

A young girl with a physical disability gazes up at a mobile of spinning horses from her little pink bed in her room filled with leafy plants. As she watches them prance about, the tufted snout of a real live horse peeks through her bedroom door. Soon enough, our bright protagonist is off and cantering on an adventure with seven majestic horses. The first six are easily understood: their colors, dreams, families, and origins are described and accompanied with exquisite drawings. The seventh horse, however, is an enigmatic creature with no clear hue or history, a lack that is soon filled in by the loving offerings of the other ponies. A story about dreaming and about caring for others, In the Meadow of Fantasies will remind young readers of their own reveries and conjure new fantasies of friendly creatures in far off lands.

Hadi Mohammadi is a distinguished Iranian children's book writer, researcher, and critic. He began his career as a freelance writer at the age of 22 and has now published more than 40 novels and picture books for children and young adults. A strong proponent of women's rights, Mohammadi has centered strong and confident girls as his heroines throughout his career. His work has been translated into several languages, including English, Thai, Turkish, Korean, and Arabic. He was nominated for the Hans Christian Andersen Award in 2006.

Nooshin Safakhoo was born in Tehran in 1980. After teaching painting classes and illustrating magazine articles, she began a long career of painting precise, lyrical images for children's books, including The Owl & the Jaybird and Shahname. Her illustrations for In the Meadow of Fantasies have earned her numerous awards, including from the NAMI Concours; and she has been selected three times to show her work at the Bologna Children's Book Fair.

Sara Khalili is an editor and translator of contemporary Iranian literature. Her translations include Moon Brow and Censoring an Iranian Love Story by Shahriar Mandanipour, The Pomegranate Lady and Her Sons by Goli Taraghi, The Book of Fate by Parinoush Saniee, Kissing the Sword by Shahrnush Parsipur, and Rituals of Restlessness by Yaghoub Yadali. Her translation of Tali Girls by Afghan novelist Siamak Herawi is forthcoming from Archipelago.