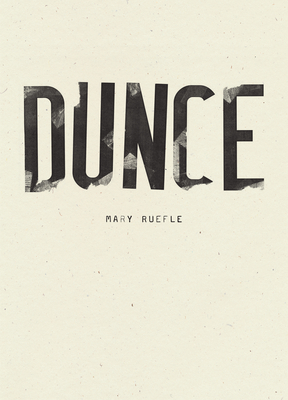 FINALIST FOR THE 2020 PULITZER PRIZE IN POETRY

Through her many projects across numerous genres, Mary Ruefle has proven herself a singular artist, drawing many fans from around the world to her unique vision. With Dunce she returns to the practice that has always been at her core: the making of poems. With her startlingly fresh sensibility, she enraptures us in poem after poem by the intensity of her attention, with the imaginative flourishes of her being-in-the-world, which is always deep with mysteries, unexpected appearances, and abiding yearning.

Mary Ruefle is the author of many books, including Dunce(Wave Books, 2019), which was a finalist for the Pulitzer Prize, National Book Critics Circle Award in Poetry, and the LA Times Book Award; My Private Property (Wave Books, 2016), Trances of the Blast (Wave Books, 2013), Madness, Rack, and Honey: Collected Lectures (Wave Books, 2012), which was a finalist for the National Book Critics Circle Award in Criticism, and Selected Poems (Wave Books, 2010), which was the winner of the William Carlos Williams Award from the Poetry Society of America. She is the recipient of numerous honors, including the Robert Creeley Award, an Award in Literature from the American Academy of Arts and Letters, a Guggenheim fellowship, a National Endowment for the Arts fellowship, and a Whiting Award. She lives in Bennington, Vermont, where she serves as the state's poet laureate.