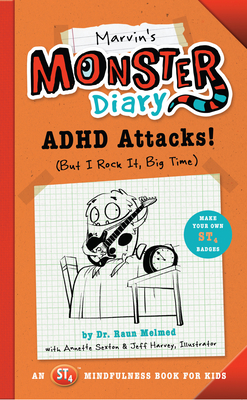 Meet Marvin, a lovable monster with a twelve-stringed baby fang guitar, a rambunctious case of ADHD, and a diary to record it all. His teachers scold him, his parents don't know what to do with him, and his sister is convinced he was raised by triple-tailed monkeys. In short, Marvin's life is feeling out of control—until a secret formula changes everything.

In the same humorous spirit of Diary of a Wimpy Kid comes Marvin's Monster Diary: ADHD Attacks! (And I Rock It, Big Time). Using the "monstercam" and "ST4" techniques developed by Dr. Raun Melmed of the Melmed Center in Arizona, Marvin's Monster Diary teaches kids how to be mindful, observe their surroundings, and take time to think about their actions. Marvin's hilarious doodles and diary entries chronicle his delightful adventures, misadventures, and eventual triumph in a funny, relatable way. It's the one book on ADHD that kids will actually want to read!

Marvin's Monster Diary also includes a resource section to help parents and teachers implement Dr. Melmed's methods, plus ST4 reminders that kids can remove, color, and place around the house.

Annette Sexton graduated from Brigham Young University with a BA in English. Diagnosed with ADHD at age ten, she is excited to be a part of helping kids face and overcome some familiar challenges. Annette also studied music and enjoys playing the piano and French horn. She loves reading, crocheting, and being a mother to two beautiful, busy little girls. She lives in Ithaca, New York, with her husband and their two daughters.